Over at RevGalBlogPals, SingingOwl writes:

I'm not a big fan of New Year's resolutions, but it does seem a good time for some reflection and planning. For the last few days I keep thinking of Psalm 90:12: So teach us to number our days that we may get a heart of wisdom. Among other things, that seems to say that reflection is in order if we want to learn and grow.

For some of us, this has been an incredibly difficult year; for others it has been a year of many joys. For all of us, there have been challenges and questions and there have been blessings and--maybe even an answer or two! As we say our goodbyes to 2010 and look towards 2011, share with us five blessings from 2010 along with five hopes or dreams for 2011.

Five blessings from 2010:
- Enjoying visits with several RevGals...many of them all at once in a late spring gathering.
- Being able to say "yes" to an exciting new job opportunity.
- My introduction to the world of animal rescue (always a mixed blessing; see my previous post for the latest).
- Witnessing Mid-Life Rookie's ordination.
- An amazing and adventurous vacation with The Alpha, with special guest appearances by Lovely Niece and Nephew-in-law.

Five hopes/dreams for 2011:
- A (really, really forever this time) home for Crystal -- again, see my previous post.
- Healthy babies for my two currently-expecting friends.
- That we will feel comfortable and ready to settle into a congregation here in our new city.
- That more people will gain a greater understanding of the concept of "enough" and will waste less and share more.
- Another awesome vacation to at least one National Park.
Posted by DogBlogger at 10:04 AM 4 comments:

So the day after I wrote my last post about all the happy rescue dogs, I learned that Crystal isn't working out in her adoptive home as well as first indicated. If any of my blog readers might know someone who would take her in, please contact me. It would be best if we could find her a home with no children, no cats, and either no dogs or one dog who should weigh at least 30 pounds.

Ugh. I so want her to find a happy home without complications. Please pray that it happens. I don't even live there anymore; I can't just go get her. And bringing her to where I live now isn't a good option, as there are breed restrictions here, and our own dogs have not yet completely adjusted.
Posted by DogBlogger at 9:56 AM 4 comments:

We've accomplished tons of stuff during this last week of 2010. (Some might even call us Responsibility Champions.) Both of us have the week off, and we have used it to do lots more unpacking, grout sealing, relative visiting, errand running, furniture and decor arranging, and the like.

One of the things I moved out of the garage today and into its proper place on the wall next to The Alpha's side of the bed was a shelf his dad made. It's a simple but elegant shelf, 16 inches wide -- perfect for mounting into two studs -- and the finish matches our bedroom furniture very well. At the old house, it held a piece of comic art, as well as three dog collars: Cub's puppy collar, Cub's grown-up collar, and Angus' baby collar (well, he was already a year old, but still -- after a few months he broke it and we got him a bigger one).

Moving is a great time to examine what you put where, and why. I figured that really, the comic book art was probably more suited to our office (i.e., third bedroom with no bed), so I grabbed a framed family photo to hang above the collar shelf. I'm not sure what year it was taken, but it was before Angus came along, so probably 2003. We were a family of three, with eight legs among us, instead of the six many humans would assume of a three-member family.

In this photo, Cub has barely any gray in her muzzle; only the kind that can be ascribed to her normal coloring, not to her age. Her right ear turns down at the tip, as it did for about the first half of her life, giving her a more distinctive (and endearing) look than a purebred dog would have. We are all smiling, all in the prime of life.

Just after I'd hung the shelf, The Alpha walked in, so I caught him up on my work in progress. He loved the idea of having that particular picture above the collars. He totally got it (one of many reasons why I love him so dang much).

So he drove the nail while I added a wire to the back of the frame. We hung up the portrait, and he arranged the collars with Cub's grown-up collar in the center, tags dangling off the front of the shelf. And I burst into tears.

Cub has been gone almost two years. It doesn't matter that she's a dog and not a human. She's family, and she's gone. And I will always miss her.

Which brings me to the year-in-review part of this post. At an appropriate point after my crying jag had ended, The Alpha and I reminded ourselves of what wonderful dogs we do have with us now. And he pointed out something very true: If Cub had still been around, we never could have taken in foster dogs. This time last year, I had jumped straight into the deep end of animal rescue and come up with Homer the Pit Bull, who was saved from being euthanized because I was able to pick him up at the shelter and hang onto him for a few days. He now lives in the Temple area.

Next came Foster (now Amos, making his home with a retired clergy couple in Dallas). After that, we had our smallest foster dog, a 20-pounder named Ralph, but who we called Little Bittle (he's now known as Teddy, and "good for absolutely nothing except being petted," according to his very pleased people).

And during the freaky Texas snowstorm, I braved bridges and overpasses to pick up Dustin (now Dusty -- adopted by my friend Cherrie, who officially designated me his fairy dogmother). Then there were the last two, Crystal and Poohbert. Crystal is still Crystal, but Poohbert, who lives by the lake, has become Puddles, so named for her love of water. Both are doing well; I've received emails from both of their families within the past week.

Someday, we will be settled enough here in the new place that we will be able to help another dog or two. And Cub will still be one big reason why we can. 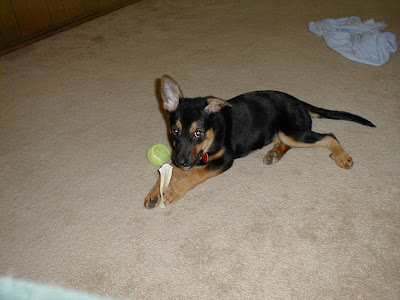 So I've set aside time to blog, and I can't remember what I was going to blog about.

I guess we'll go with some assorted updates:

- The church search continues (as we expect it to for several more months). We have become moderately involved in one community of faith, but we aren't sure that it's home. So we drop a fiver in the offering basket and keep tithing to the church we still miss, back in Texas.
- Since I last blogged, we had The Great Granite Countertop Debacle of 2010, which has now been solved, thanks to a second granite company and another chunk of cash. Such a piddly little first-world problem that took up way too much of our energy.
- The slate backsplash will go in this weekend, and the new fridge arrives tomorrow. After that, we just have to finish texturing and painting in there and our kitchen will be ready. When that's done, it's down to bedroom walls, master bathroom, and trim throughout the house.
- We haven't yet figured out the proper configuration for dog-bathing in this house, as it doesn't have an inescapable sliding shower door like the last house did. So today the dogs are off to the local Pet Palace, where they'll get the stink washed off of 'em.
- Found out that a friend of mine who was asked by his superiors to take a leave of absence from pastoring has pretty much been told they don't want him back, so he enrolled in truck-driving school. This is supposed to be the new era, where churches will need to change to meet the needs of the "mission field." I think this particular pastor may have gotten into trouble by pushing his churches (too hard for their tastes) to do just that. So he's told not to expect to be appointed anywhere. Again with the irony.
- Have barely begun shopping for Christmas gifts (because I'm sick of consumer Christmas and we are busy enough already). What we have bought is fair trade, and I believe we'll be spending a bunch of money on items from the Heifer Gift Catalog, too. I love Heifer. In November I got to visit both their ranch and their world headquarters. In fact, our little bit of Christmas shopping was done at the ranch gift shop.