She couldn't resist the power of his cuteness. 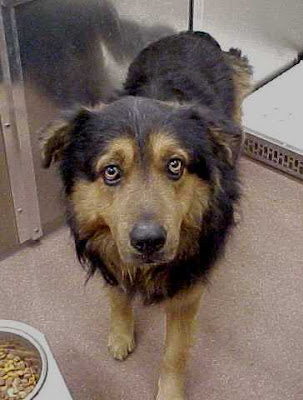 Adam is his name right now, though she may plan to change it when he gets home today. He was on my former city's shelter euthanization list this week. Joe, the amazing and dedicated animal services staff member who works his tail off to try to get animals placed rather than euthanized, added a personal note about Adam to this week's list. He makes videos of animals as he's able, and he did a lovely one of Adam set to James Taylor's "You've Got a Friend." I posted it on that ubiquitous social networking site that has had the annoying effect of decreasing blogging, and three friends shared it.

One of those friends was Kirsten. And even though she already had two dogs, she didn't wait for someone else to go adopt Adam. So now, instead of losing his life today, Adam is only losing his junk (which I'm pretty sure he won't miss), and Kirsten can pick him up at the vet after 4:00.
I knew there was a reason I never told Joe to take me off his email list after I moved.
Posted by DogBlogger at 7:43 AM 11 comments: