Yikes at all the stuff happening.

- Our Texas house is under contract, with a closing date of October 21.
- We got the inspection report, and the buyers' requests aren't that bad. Still, I'd love if they were already resolved.
- We think we found a house in Capital City. We're so picky that we are making an offer on a cheaper house than what we could actually afford; one that will need immediate updating, so we can spend some money on updating right away.
- This house, if it is the house, is 400 square-feet smaller than our previous one. On purpose. All that talk at Heifer Ranch of how much is enough really got to The Alpha--and to me, too, even though I didn't actually get to go.
- And right now, this house has got some craptastic walls in the kitchen and bathrooms! I foresee more bouts with tendinitis, triggered by hours spent covering up very not-us wallpaper with Sheetrock mud and a putty knife.
- I wish I'd taken a picture of the Spongebob toilet seat. Another day, perhaps.
- Our backup options... well, we haven't agreed on a backup option. So I hope we don't need one.
Posted by DogBlogger at 5:45 PM 3 comments:

Sitting at the airport waiting for my flight to training in MethoVaticanCity, so I thought I'd blog (hooray for free wi-fi at LIT terminal!). This morning was absolutely lovely, and I thought the dogs deserved some more time outside than just their hurry-up-run-and-pee-get-back-in-here-you-have-no-fence-no-don't-run-after-that-rooster-and-don't-eat-that-whatever-it-is-and-don't-even-PRETEND-to-go-toward-the-road experience that's currently their typical trip outdoors.
I gave them each separate trips outside so I only had to worry with watching one dog at a time.
Tuesday chose to waller in the cool grass under the shade tree: 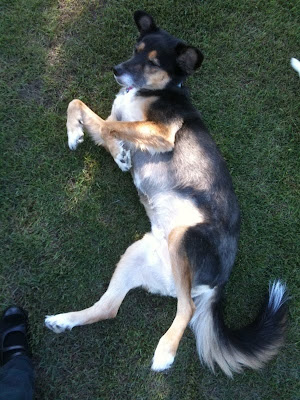 Angus did his share of wallering, too, and then he and I had a nice play session with his bluebell (he's still great at attempting to fly after it as it sails through the air): 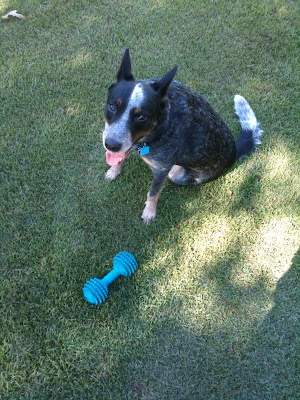 I love my dogs. The Alpha's parents are really great -- they take excellent care of the dogs whether I'm there or not, so I'll have no worries about them while I'm in MethoVaticanCity. But I'm praying for a house sale soon, so I can choose their next fenced backyard and be able to let them out without guarding their every move.
Posted by DogBlogger at 2:43 PM 3 comments:

If that house were in Texas, and not for sale, it would have a 100-pound husky in it tonight.
And if that house were in Little Rock, it would've had a strange little puppy in it after lunch today.
Every week I get the email updates from the Suburbia city shelter. It's how Crystal and Poohbert came to be our foster dogs. They've had some pretty good weeks recently, with all animals getting adopted or rescued instead of euthanized. One week they didn't even have to put any at all on the urgent list. But it looks like this week the streak may end. The last email I got still included quite a few dogs and cats looking for homes. Among them: Diamond, a large Husky about 7 years old who was owner surrendered, adopted, and then returned because he didn't get along with the family's cat.
Like I said, if my Texas house weren't on the market, it would have a Husky in it by now. Instead, he will probably die tomorrow morning (they gave the animals an extra day because of the holiday weekend, but with the tropical storm, folks haven't been getting out in the rain to adopt).
And at lunch today, two of my co-workers introduced me to a place to procure a yummy milkshake. It's out of our way, and not in the best area. As we were getting out of the car to place our order at the walk-up window, one of my co-workers said, "That's a cute puppy."
"Where?" I asked, and he pointed behind the dumpster. Then the little black-and-tan somethingorother (part cocker spaniel, we think) came over to visit with all three of us. I wore sandals today, which meant I got a complimentary toe-licking with my puppy visit.
Puppy was a boy. No collar, and obviously no fence keeping him safe. I told my co-workers that if I had a house, I'd inquire with the lady at the window, and if she didn't know who Puppy belonged to (or if who he belonged to didn't plan on providing any better care than letting him wander) we'd be picking up the pup along with our milkshakes and dropping him off at my house before we went back to the office.
As it stands, though, I couldn't help. I hate not being able to help. At the same time, given the long-term fostering I did this spring, I realize I could easily get stuck with another dog or two for an indefinite amount of time.
But I still want to help.
---
UPDATE: Just got the final email for today. All dogs but one have been rescued, and we believe that one has a rescue group interested. Several cats still left, though... which is sad, but makes me powerless to help because of my allergy.
Posted by DogBlogger at 5:08 PM 3 comments:

Over at RevGalBlogPals, Martha writes...

I'm listening this morning for word of Hurricane Earl. Is he coming to visit, or will he bypass my part of Maine and move further Downeast, or veer toward Nova Scotia? Should I buy those bottles of water, just in case wind brings branches and power lines down? And how many times will the tracking map change today?

Herewith, a Friday Five about the storms of life:

1) What's the most common kind of storm in your neck of the woods?
Though I'm taking today off and hanging out in lightly-tornadic Texas today, I've spent the last month living back in my home state, a.k.a. Tornado Country. We can't claim to be the home of Dorothy Gale, but I can say about a mile of the drive between my in-laws' house and my office looks dramatically different than it did before the twister came through several years back.

2) When was the last time you dealt with a significant power outage?
Been a while. But the most recent one I was part of that lasted several days took place surrounding my sister-in-law's wedding, almost 10 years ago (thanks to an ice storm, not a tornado). The church had power, some relatives a mile or two away had power, but my in-laws' house did not. I remember helping my mom-in-law make punch by flashlight and sending gallon jugs of it over to spend the night in an aunt's freezer. The powdered ingredients floated in the flashlight beams, and the morning of the wedding, we awoke to a film of red punch dust covering every surface in the kitchen.

3) Are you prepared for the next one?
Not particularly. The Alpha usually keeps either a 24- or 72-hour pack in the hall closet, but the house is on the market. We've cleaned out a lot of stuff. His car does have an electrical outlet, though, so if we ever lose power in a widespread area, we can run some things as long as we conserve gas and batteries.

5) How do you calm your personal storms?
Talking things out with trusted friends usually helps. Just telling the story of whatever storm it is to someone who understands can make an enormous difference.
Posted by DogBlogger at 7:10 AM 8 comments: