Over at RevGalBlogPals, KathrynZJ writes:

1) What home fix-it project is on your Big To-Do? Trying to decide between bathroom and kitchen.

2) What event (fun or work) is on your Big To-Do? This minute, leaving town to go be in the wedding of my college roommate/maid of honor. (Dogs and house are in good hands while we're gone.)

3) What trip is on your Big To-Do? Still haven't decided on vacation for this year. Didn't do one last year because of General Conference. Might work something in before fall....

4) What do you wish was on someone ELSE's (partner, family member, celebrity, etc...) Big To-Do? I wish for two prospective visits to my house this summer: Lovely Niece and fiancee (or he'd better be, by the time they visit in August!), and dear friend who is wearing a dress identical to mine in this bridal party lineup, along with her family.

5) Getting inspired? What may end this summer having moved from the Big To-Do to the Big Ta-da? Kitchen or bathroom, I hope!
Posted by DogBlogger at 8:34 AM 7 comments:

Oh, the cuteness of dogs.

Thanks, Jessica, for these oh-so-grand photos of Angus and Tuesday from yesterday's cookout! (And for the potato salad...)

As often happens when he's around lots of activity, Angus put his overstimulated self right in The Alpha's lap for security, if not comfort: 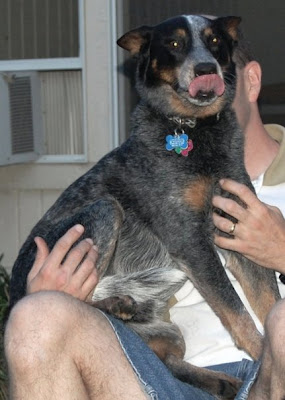 And Tuesday was in this pose just long enough for Jessica to catch the shot with her brother's fancy-pants camera -- I couldn't have gotten it with mine: 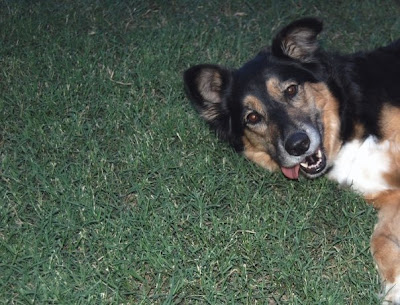 Ah, the joy of a late spring evening.
Posted by DogBlogger at 6:14 PM 9 comments: 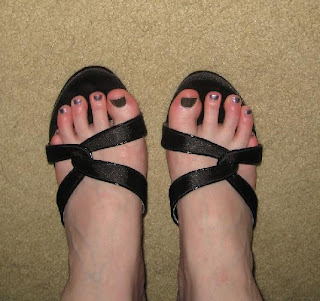 I'm sure some people find it atrocious that it took me more than three decades to get a pedicure.

And I would've gone another two weeks longer, too, if it hadn't been for the open-toed shoes that really were the best option for replacing the strappy closed-toed ones that broke.

The result: For a couple of weeks this year at least, I'm being a little bit more of a girlie-girl than usual.

The polish is a discontinued OPI color that I've held onto for about a decade (Amethyst Abyss). Used it on my fingernails around the turn of the century, but hadn't given it much play in the intervening years. Great color(s), though -- it's either purple or green, depending on the angle.

As a result of this foot-centric development, I've gone a whopping 4 days without donning a pair of socks -- a highly unusual move for me. I like socks. Socks are very practical and I find them quite comfy. But between these black slides with 2-inch heels and the gold strappy flats that were on sale at The Targ on Friday, I've been able to subsist with impractical footwear.

That said, I really do think I'll go back to socks soon. And closed-toed, good-traction shoes that stay on your feet if you have to run. Because you just. never. know. when you might have to make a break for it, do you?
Posted by DogBlogger at 9:46 PM 7 comments:

Literary snob: I liked The Shack!

Sometimes I think we literary types try too hard to find things wrong with novels. (If everybody were Faulkner, then Faulkner wouldn't be Faulkner. So don't expect everyone to approach that mark.)

I just had a Twitter exchange with John Carney and Greg Milinovich about The Shack. I tweeted about it because I didn't think I had enough to make a substantial blog post about it, but after going back and forth with Greg for a bit, I think I do.

Yes, The Shack is clichéd at points, predictable in others, but it's still worth reading.

Greg tweeted, "some are really against it thought saying that it is a wolf in sheep's clothing: a venue for heresy. i don't agree." Neither do I. I do think some people have way too big of a problem with the idea of God presenting Godself as a large black woman who goes by "Papa." In fact, in my borrowed copy, my friend's father's bookmark rested just a few pages after Papa introduced herself. My friend's guess is that it challenged her dad's thinking a bit more than he wanted to admit.

The thing is dripping in grace theology, a concept lost on most humans much of the time. But lots of scholarly texts say more about grace than does The Shack. The difference here is that it's actually readable for someone who isn't interested in a textbook or a sermon.

(Part of me wishes there was more detail about tracking down Missy's killer, but that part of me just really likes a good detective story. It's not necessary for the plot.)

So, yes, some heavy-handedness in the narrative. But I think as a parable, it can provide a better understanding of love and forgiveness.

(And what if God is Aretha Franklin? Wouldn't you be embarrassed if you'd said God couldn't be the Queen of Soul, and she turned out to be just that? In her Inauguration hat?)

Anyway, The Shack is easy to follow, holds the reader's attention, and has the potential to inspire new ways of thinking and living. If you haven't read it, consider doing so.
Posted by DogBlogger at 9:48 PM 11 comments:

Well, The Alpha and ManBoy were having a pretty good Day 1 on the Bike MS ride, but it was cut short when a storm blew through the area just as they reached the last breakpoint of the day. They had already decided not to camp at the overnight site, which we knew was the right call when camping was officially canceled. And not long after we got home for the evening, about the time the hail started to fall on the next morning's starting line, Day 2 of the ride was canceled.

The National MS Society wrote in an email announcing the cancellation, "As we've seen this weekend, our North Texas weather is just like MS: unpredictable." True. In fact, it didn't rain today after all -- though I still think the severity of yesterday's and last night's storms justified the calling-off of the event. (Just as Mid-Life Rookie and I were leaving to pick up our riders, the Cowboys had a bit of a problem a couple of suburbs over.) ManBoy is disappointed that he doesn't get to answer the "What'd you do this weekend?" question with "Rode my bike 150 miles," but he had a very good time with the 72, so I'm certain he will find another opportunity.

Thanks to everyone who offered support, whether it was as a part of the online cheering section or as a donor. The money raised still goes to fight MS, and that was the real goal. Not all the numbers are final yet, but it looks like our two guys topped $1,600 together!
Posted by DogBlogger at 5:36 PM 5 comments: