Update on Tueser, and extras

Our Tuesday girl has a severe bladder infection. We took her into the vet this morning and they had to sedate her to drain her bladder and flush it out. Poor thing could barely walk from the lingering anesthesia when we took her home, so The Alpha carried all 66 pounds of her to the car, and in from the car to the couch, where she (and I) spent the afternoon: 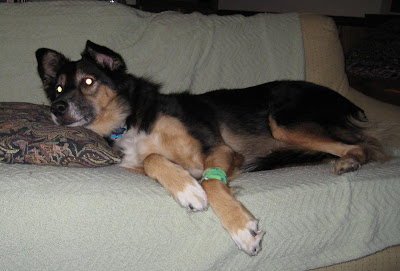 She's on heavy antibiotics and something for pain now. She has started to eat again, but we aren't satisfied with the amount of water she's getting. We need to see that her urinary tract is functioning again. (Yes, I need to see my dog pee. I know how silly that might sound to some, but it's true.)

And today we also bade goodbye to Rusty, our guest dog for the past few weeks. Here we are, all together in the den between Tuesday's vet visit and Rusty's farewell: 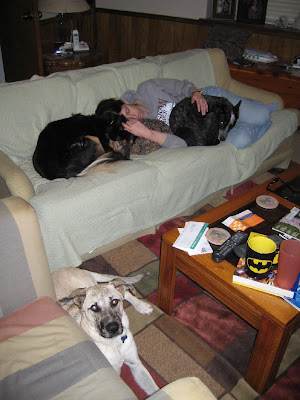 He was a handful, yes, but he's really a good boy, with lots of potential to be a good grown-up dog. I hope once he gets settled in Corpus Christi he adjusts well and is the best dog he can be.

Now, off to see if I can convince the Tueser to drink some water.
Posted by DogBlogger at 8:26 PM 7 comments:

Less than a week ago, with about an hour's notice, we opened our home to Rusty, a 7-month-old pup. We're pretty sure he'll be around for the rest of the month while his family makes plans to relocate. 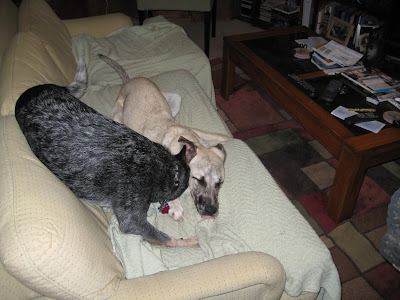 The Boy did not approve this decision. 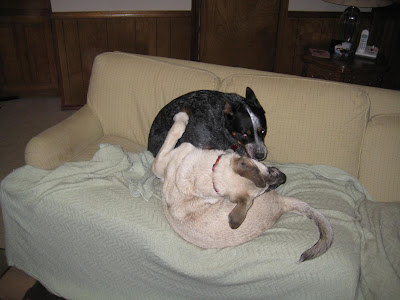 But he seems to be adjusting well. I mean, look at what a gracious host he is. 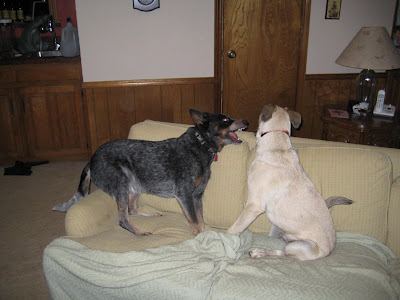 He's even sharing the Dog Couch, complete with Dog Blanket. 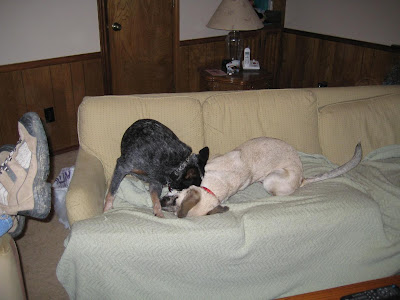 The Boy and Tuesday (and the thumb-havers) will get a reprieve next weekend, when we'll have some human houseguests and will farm Rusty out to a family who adopted one of his litter-mates. 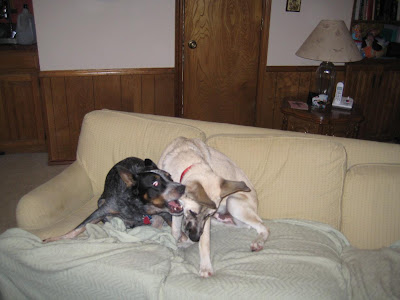 As you can see, The Boy's excited about that part. 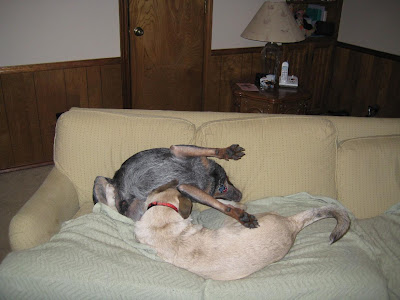 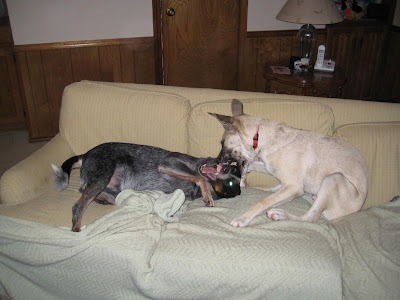 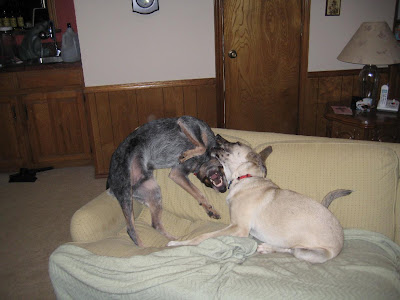 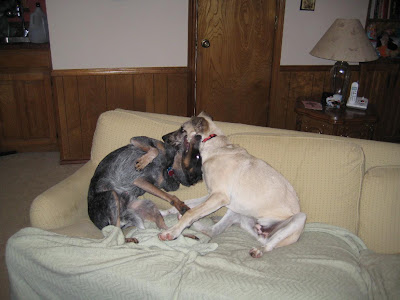 I'm sure, eventually, this brief, two-part stay will have a happy ending. 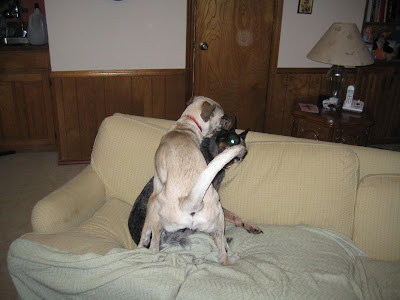 This weekend the dogs coped quite well with extensive traveling and new experiences. ("Cope" is one of the commands they know, along with "sit," "stay," "lie down," etc. In context: "Good dogs can cope. Those are some good dogs who cope, yes they are.")

Zorra has graciously posted Tuesday's account of the weekend over on her blog, so I'll just share a couple of other things.

We tried a new canine restraint method for this trip: 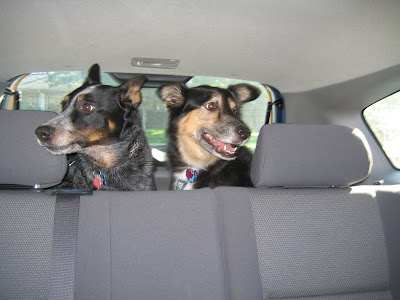 The Alpha's car has these nifty metal loops in the cargo hold that can be used for tying things down... or for slip-knotting a leash that is attached to a dog's seat-belt harness. The dogs had freedom to stand, sit, lie down on their beds, and move around a bit, but couldn't get into the human-passenger area of the car. They got tangled up far less often than they do when they are similarly restrained in the back seat, and the back seat stayed largely free of fur. Which was a great help the next day, when we packed all four adults and two dogs in the car and headed to Galveston: 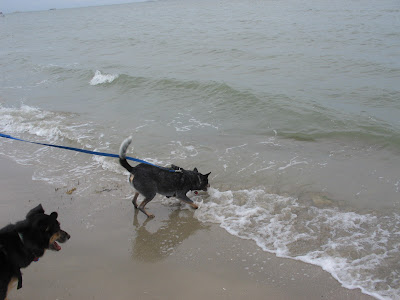 ...where The Boy determined that the ocean was chasing him, coming at him like that over and over. He decided that the best course of action was to bite the waves, as shown above. At first glance, it might look like he's drinking sea water, but no. He's biting the foam at the leading edge of the wave. (We took him back off the beach and into town after just a few minutes, and he calmed down. Well, as calm as a blue heeler can get, anyway.)

A wonderful time was had by all. Again, for a more complete picture of the weekend, go visit Zorra's blog... we are home now, and there is laundry to be done before bed, so I'm stepping away from the keyboard.
Posted by DogBlogger at 9:29 PM 7 comments: