We were in a church sanctuary for at least an hour this morning. We tried.

But we failed. Or, more accurately, I think the entire church may have failed to worship.

It started out okay enough. We parked in a clearly-marked visitor spot, entered the building, received a welcome, a recognition that we were visiting for the first time, and a bulletin. We walked into the sanctuary, sat down in the center of a pew about 3/4 of the way back, and got greeted by one more person (who I realized I'd talked to this week on the phone as part of my job, but we kept the introductions to first names for the more incognito visitor experience). She said, "I'll be right back," and did indeed return a few minutes later with a recent church newsletter and a visitors' packet containing brochures on all their ministries.

After that, it started to get weird. We opened our worship bulletins and found hymn selections that raised our eyebrows. You'd have thought it was Independence Day weekend from the first two hymns. We wondered about them for a bit, then decided it probably had something to do with Thanksgiving coming up this week, though we aren't accustomed to big displays of patriotism for Thanksgiving, especially in church.

So, we sang "America the Beautiful" for our "Hymn of Praise," -- yes, that was the label in the bulletin and over the PA system. The Alpha leaned over to me and asked, "Praise to whom?" Exactly what I was wondering. The hymn is clearly addressed to America, not to God.

Then the substitute associate pastor, a retired clergyman from another Conference, waxed all emotional about how great America is compared to other countries. We think he got a little verklempt. Meanwhile, I'm glancing over at some of the diversity in the pews near us, wondering if everyone in here is indeed a citizen of the U.S.

The next hymn was "My Country, 'Tis of Thee." Ohhhh, The Alpha noticed... it mentions pilgrims. That's why it's a Thanksgiving hymn, we supposed. Still, another hymn not directed to God. I like to limit those types of moves to one per service, myself. And even then, it's sketchy.

Scriptural basis for the sermon was Romans 12:1-2. The senior pastor explained to the congregation that John Wesley was hearing this very same passage when he had what is now referred to as his "Aldersgate experience." WRONG! I know better! And teh Intarwebs backs me up:

"In the evening I went very unwillingly to a society in Aldersgate Street, where one was reading Luther's preface to the Epistle to the Romans." --from The Journal of John Wesley, May 24, 1738

HaHAA! Luther's preface! Wesley wasn't listening to the Bible itself being read.

Then, later in the sermon, the pastor states, pretty much out of nowhere, that "Thanksgiving is our only 100 percent religious holiday."

That comment got badger-faced (Liz Lemon-style) by both The Alpha and me. Is any holiday 100 percent religious? If so, I don't think Thanksgiving wins that distinction. Plenty of people give thanks on Thanksgiving without involving God in it. They may thank their parents for not making them cook anything, or they thank their place of employment for not making them work (or for paying them extra if they do have to work). But I'm guessing we have a significant fraction of Americans whose primary celebration of Thanksgiving basically amounts to, "YAY! TURKEY!"

Crap. I just lost several paragraphs of this post. Intarwebs fail. I'll be hitting "save now" after every sentence from here on out.

This congregation also applauded. at. everything. I usually can forgive a congregation for applauding after the children's choir sings, even if I do believe it sends the wrong message (kiddoes, who are you singing for? The congregation? No! You're singing for God, not those people out there). But these folks also applauded after the big-people choral anthem, and they applauded again when the pastor did the "right arm" verse of the Hokey Pokey as part of his sermon. (God wants you to "put your whole self in," of course. But he left out my favorite part of this illustration: You aren't just supposed to put your backside in church. It's no fun without a butt reference.) Yes. They applauded the Hokey Pokey. And not after they had all successfully done it themselves, which I think is perhaps the only appropriate time to applaud the Hokey Pokey. And even then, not always.

At one point in the service, I decided I'd try to learn a little bit more about the place by skimming the newsletter given to us by the friendly lady. That's when I learned that apparently, the place is falling apart as far as staffing is concerned. They had to cut one position, and then two other people have resigned. Doesn't bode well.

We have visited four other churches here in the area, and while no church is perfect, nor do we expect it to be, we've felt at least okay with most of the worship experiences. This is the first time we haven't been able to get our worship groove on even a little.

And now I have to go. I've spent too long on this blog post when I should be busy fighting our house. We must beat it into submission.

The following photos aren't that great, but for those who asked to see, they should give you the gist of what's currently going on at the new (to us) Manor.
First off, if you haven't seen this over on teh Facey Spaces, here's the first thing I removed from the house after I signed the papers and got the key: 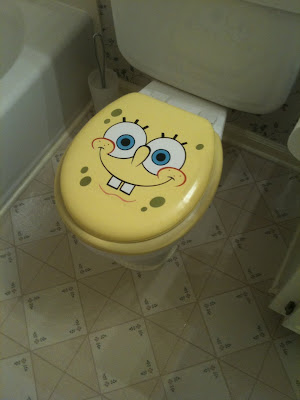 It's still in the garage, because I kinda hope I get invited to a white elephant gift exchange this Christmas.

Okay, on to some more stuff.
Here's the back hallway, facing toward the front of the house. The door in front of you is the garage; the door in front of it is the open door of an oddly-placed closet. Oh, well, at least we have storage. To the left is the laundry closet (I wouldn't call it a room because you can't actually walk into it, but it's big enough for the washer and dryer and a couple more things). To the right is the master bedroom. Behind the camera is the bedroom we're using as the study/office/whatever. Guest room and hallway bath are around the corner to the left. 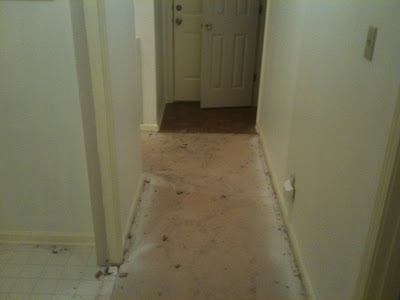 Here's the breakfast area. It's maybe halfway finished. No, I take that back. Only the floor is finished. But we still have to seal the grout, so technically, none of it is finished. We must also rid it of the rest of the wallpaper, paint it with the same tan and red we used in our old house, and replace the light fixture. Here's the dining area (three walls and an open view of the living area, so not technically its own room). Two walls painted the same red as our old dining room. Third wall painted the same tan as our old kitchen and the lower part of our old dining room. Though it doesn't show up in the photo, the light fixture is the hard-wired oval paper lantern we had in the old house (new owners let us take it). The doorway you see leads to the breakfast area off the kitchen (pictured above). 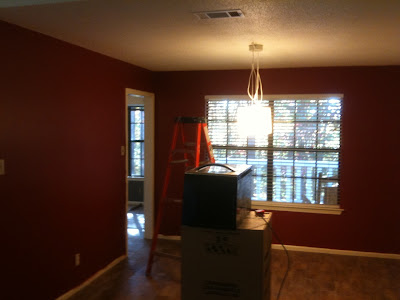 More kitchen-in-progress. The cabinets have already been stripped and re-painted white, but the pinkish wallpaper has yet to go. The countertops left today. Granite countertop installation happens Friday. Dishwasher installation should happen before that; stove installation after; and a new, deeper sink at the same time as the granite. 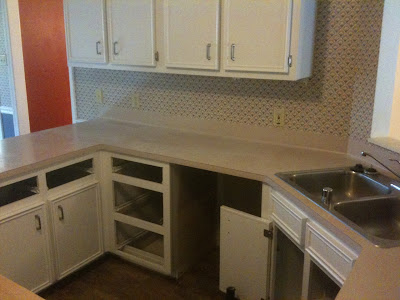 Also, we discovered our fridge, the pretty one we bought last year during the Kitchen Remodel of Aught-Nine, is too wide for the space in this new kitchen. Craptastic! We have to buy a new fridge, and hopefully sell the year-old one at a decent return. Plus, we made a little money off the previous owners' fridge, which they didn't care to take with them. (We have sold a number of such things on that list, by that guy. You know the one.)
I'm feeling way over-consumed. We aren't going into debt to do any of this, but I don't like buying so much stuff.
Which is one of the reasons why we're going to endure the master bathroom's current condition a bit longer... 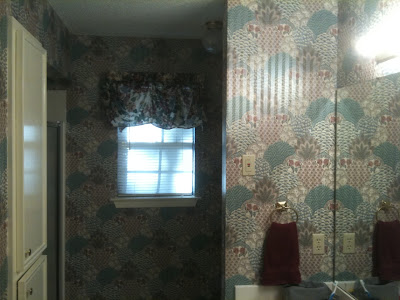 Yeah, let me give you a close-up of that wallpaper pattern. Notice the sheen of stripes? As if the other wasn't enough. 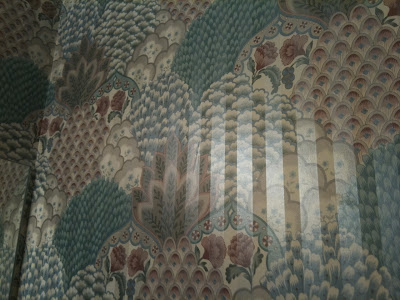 Impromptu contest: Leave a description of this wallpaper, or perhaps a story of the pattern's origin, in the comments. Best answer gets a prize. I'll figure out what the prize is while I'm unpacking. Which should happen some time before Christmas. Maybe.

Because I miss my blog.

And I miss reading other people's blogs, too. Between my work duties and our mad rush at home improvement since the move, blogging has fallen even further down the list of priorities. True, FB helps me keep up with many of the same people, but not in such a significant way as reading regular blog entries would. Most of us face similar situations these days, it seems.

- The kitchen cabinets are now nicely painted (instead of crappily painted like they were when we moved in), and the wood-look tile we loved having in our old house now makes up our living/dining/kitchen floors.
- We still haven't moved into those three rooms. We want to get some other stuff done first (like grout sealing, doing away with the kitchen wallpaper, installing countertops and appliances). Lots of stuff in the garage; cars don't fit.
- The dogs seem to be adjusting. The first week we were here, I actually splurged for 3 days of doggy day care because workmen were at the house all day and I didn't really know if the dogs understood that the backyard belongs to them. Now they seem to get it, though.
- We did get our guest room arranged, and have already hosted overnight guests: my sister, bro-in-law, and their two dogs.
- The Alpha is driving a 65-mile commute each way, three days a week. He's really hoping to back that down by a day or two within the next few months. His two work-from-home days per week are going well.
- Tonight I'm planning to texture the walls in the hallway bathroom. We have a to-do list a mile long, but we're chipping away at it, bit by bit.
- New flooring in the hallway should happen this weekend.
- Work we've had done: kitchen and hallway cabinets and fireplace mantel professionally painted with oil-base enamel; tile laid in three rooms; new HVAC system in the process of installation (furnace complete; a/c on Friday); burglar alarm installation.
- Work we've done ourselves: three ceiling fans installed; wallpaper stripped from hallway bath; blinds installed in living room; old stove and dishwasher removed and sold; dining room lighting from old house installed (brass chandelier taken down and donated to cool urban church plant -- they'll spray-paint it yellow to hang it in their space); and a number of other tiny things.
- And now it's time for me to leave for work. 'bye now.
Posted by DogBlogger at 7:10 AM 9 comments: