- I set up a new email address. I thought I changed everything over, but Blogger didn't want to start sending my comments to the new address. I finally got it to quit sending to my old address... but now I think they're going out into the ether somewhere instead of landing in any inbox of mine.

- The reason I set up a new email address is because we are moving.

- Holy crap, we are moving back to our home state.

- We still have one foster dog who needs adopting. Our home state allows BSLs (breed-specific laws) restricting where dogs who look like Crystal can live. We could take her with us if it comes to that--which is why we aren't looking in the suburb that has the outright ban on three breeds--but I don't think it would be a friendly environment for her.

- I am really digging this CD lately.

- Oh, great. My last two blog comments just arrived via the old address. No progress there.

Ah, the Poohbert. She's such a cutie. 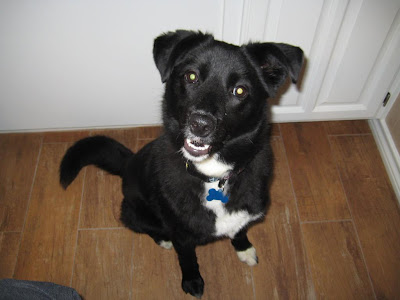 Which is why we were a little mystified as to why nobody had called about adopting her in the two months we'd had her. We did have some friends who admired her, but no serious inquiries... until last weekend, when Barb, a woman from a rural town north of here, called to see if Poohbert girl was still looking for her forever home.

Barb was already partway down to our 'burb running errands when she called, and she decided to go ahead and come have a look in-person. It went well -- Poohbert reminded Barb of her dear departed dog, but not too much -- and so the pre-adoption process began: checking out the veterinary history of the potential adopter, testing Poohbert around cats since she might be living with a couple, etc.

Yesterday morning, we had Poohbert jump on in the car for a ride northward. An hour later, from a dead-end road off a dead-end road, we turned into a driveway of a house near the lake.

Poohbert met Daisy the dog, who lives next door. She met Bob, Barb's husband. She also met neighbor dogs Honey and Trapper, and Shadow the Cat. She ran a few good laps around the yard and figured out Daisy can run faster than she can. She sniffed all around the house and figured out where the cats like to curl up and sun themselves.

We walked her down to the lake, and she had her first experience with waves chasing her on the shore. She wasn't really sure what to think about that. She watched Daisy dog swim around, though.

She drank lots of water, and left an equal amount splattered on the floor all around the indoor dish, and all around the bowl on the porch, too, as we had warned she would. Barb didn't mind. 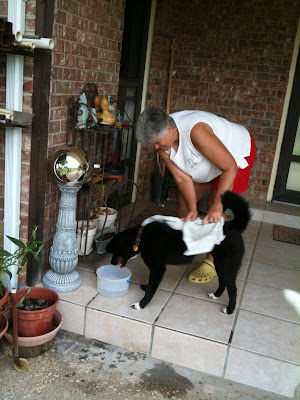 This morning, Puddles woke up her new mom at 4 a.m. because she had to be a good dog and go for a trip outside. And then at 6 a.m., she just wanted to get up and check out the lake a little more. 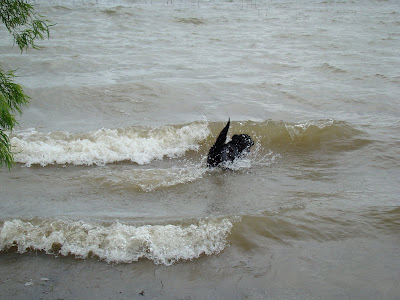 She sure looks like she's home to me.
Posted by DogBlogger at 8:41 PM 10 comments: