Yeah, this pretty much covers it.

Thanks to Mary Beth for sharing this on her blog!

Labels: dogblogging, people who get it

It's been entirely too long since my last blog entry. But lots of stuff has been happening. Most blogworthy is the story of Bo the Rescue Dog.

It all started when I got a message from a fellow church member and animal person, on Thursday the 6th. There were several photos attached, including this one: 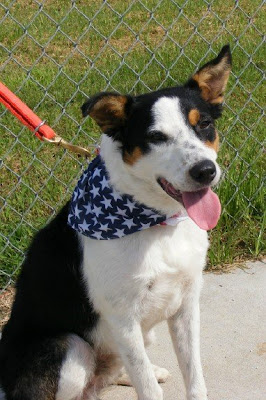 The message made it clear that this was Bo, a stray who had been picked up by Sulphur Springs Animal Control, and he was scheduled to be... well... gone, one way or another, on Friday the 7th.

Something about him got my attention. So I posted him on my profile in the social networking platform referred to herein as Tracelook and asked if anyone could help. I got several comments. Enough that the next morning, I called the animal control officer's number listed in the email, and sure enough, Bo was still there.

But, there was good news: There was someone who wanted to adopt him! In Houston. With a schedule that didn't permit her driving to Sulphur Springs to get him (a 300-mile trip, one-way). I told the animal control officer, who had totally fallen in love with Bo, that I'd see what I could do... and went back to Tracelook.

Several people (including RevGals from several different states) offered up prayer, and I'm pretty sure it worked... It couldn't have been much longer than 15 minutes before I had offers of a possible ride for Bo to the DFW area, someone willing to keep him for a few days if nobody else surfaced to fill that need, and a ride from the DFW area to Houston the following Thursday from a friend who was headed there anyway.

Within a few hours, each of those elements worked themselves into place. A former boyfriend of Susie's lives in Sulphur Springs and is as much of a sucker for animals as we are. He filled out Bo's adoption forms after work that day and drove him to Dallas. He and Susie made arrangements to meet Liz and Ken for a foster-family handoff. Liz kept him from Friday night until Thursday morning, quickly becoming attached and deciding that this fostering thing wasn't something she could do all the time (I don't blame her!).

Here's Bo in his temporary home, sitting with Ken and Angel (he's the little blurry one on the right): 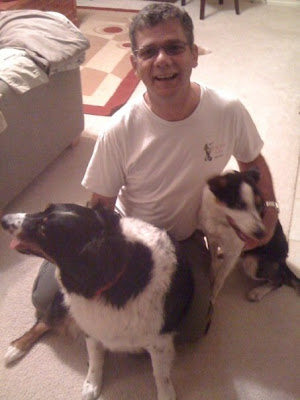 ...and here cuddling with Liz while Angel watches: 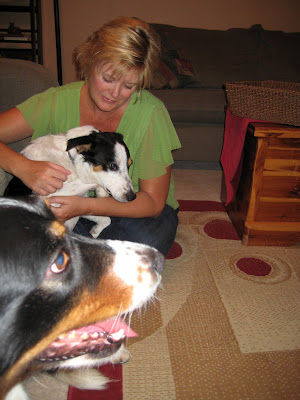 The following Monday I got to go meet sweet Bo at Liz and Ken's house. What a doll... 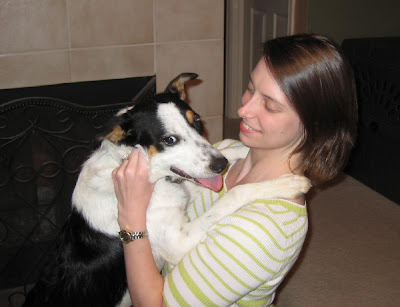 And on Thursday, Mary Brooke and Clayton picked him up and took him to his new home in Houston. Here MB (on the right) is leaves him with Vickie, his new mama (left): 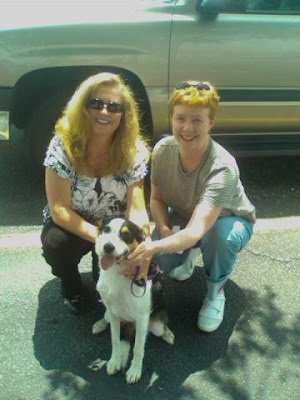 Bo now has his own page on Tracelook and many people involved in his trip to Houston are keeping up with him. We're glad Vickie is sharing him with us in that small way.

Yes, social media's uses are limited. It's not the same as face-to-face relationships. But I'm mighty glad that in this case, it provided the framework for our impromptu Underpup Railroad, and we know one little dog has a happy home because of it.
Posted by DogBlogger at 5:11 PM 7 comments:

Labels: better world, catching up, dogblogging, people who get it

Okay, it's all done! Now we just have to put up the window coverings, seal the granite, and move everything back in there... and I have to leave for work five minutes ago, so I'll quit writing and just post the pics: 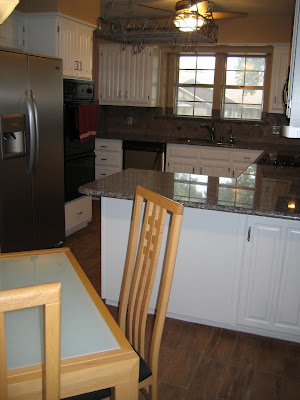 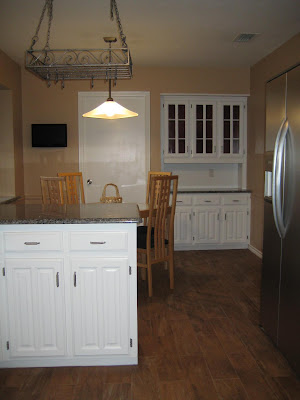 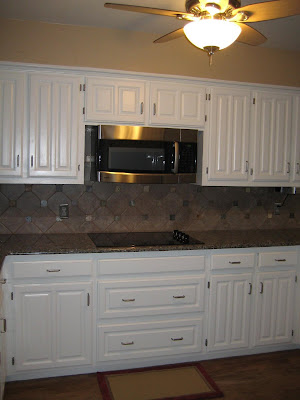 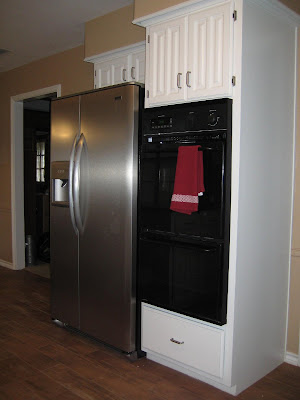 The grout went in yesterday... a day's delay because it didn't dawn on anyone that we hadn't yet chosen the grout color. We wound up picking "Earth." Here it is. 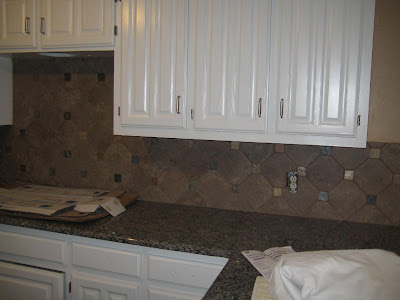 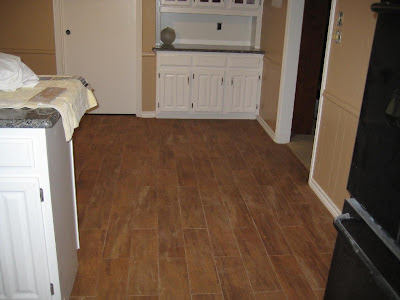 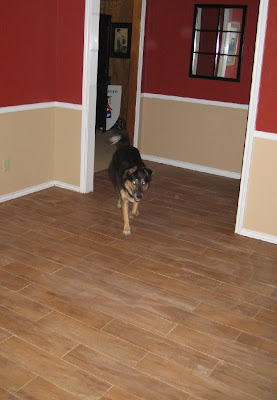 This afternoon The Alpha began sealing the grout, and I joined him when I got home from work. (Sealing the grout and hanging one light fixture are pretty much the only labor we ourselves have contributed to this process, beyond moving stuff out of the area. Why? So we can say, "It's Shake-n-Bake, and we helped...")

We have both coats of sealant over the laundry room and kitchen floor grout, and over the portion of the backsplash that will be covered by the microwave and range hood. The rest of the second coat will happen later. For now, this is enough. The pros can now install appliances and do paint touch-ups. I think there's still a chance this will all be finished tomorrow, but I wouldn't be surprised if there are some little things that don't wrap up until the weekend. I'm amazed at how many details are involved. (I haven't even told the full Tale of the Hinges on the blog. I'm not sure I want to; I think it took four attempts to get the proper cabinet door hinges... but dang, I gotta hand it to our contractor friend for his persistence on that point.)

So, I'm thinking I probably won't take more update photos until we have some furnishings back in the kitchen. Because it's really getting that close to being finished!
Posted by DogBlogger at 10:45 PM 8 comments:

Well, Tuesday got a little less nervous when we had our special house guest for a few days. Apparently, house guests are good for dogs who aren't sure about kitchen remodeling. 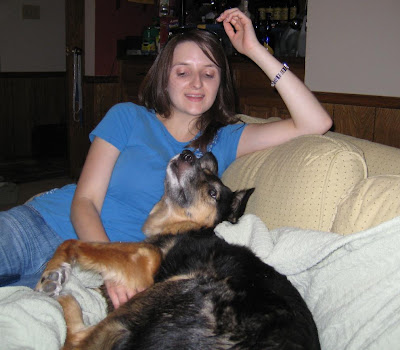 Several times we found her hanging out in the guest bedroom, our niece's space for the extended weekend visit. But this pic is the two of them hanging out in the den, just a couple of hours before Meredith flew back to the Land of Our Roots. (The Boy seemed to appreciate M's presence, too, but he's generally more subtle with his affections.)

We found out that the timing for her return was serendipitous; while waiting at the airport she learned her mother was being admitted to the hospital for IV steroid treatments (stupid MS). Even while making some progress on wedding plans, she has been quite the advocate for her mom these last couple of days. This evening I was treated to The Tale of How We Are Finally Getting to Replace That Lame-Ass Neurologist. I'm eager to hear how Chapter 2 of that one turns out.
Posted by DogBlogger at 10:16 PM 2 comments:

Between several thunderstorms in the past week and the big remodeling project causing the reconfiguration of daily patterns around here, Tuesday has had a touch of nervous behavior. 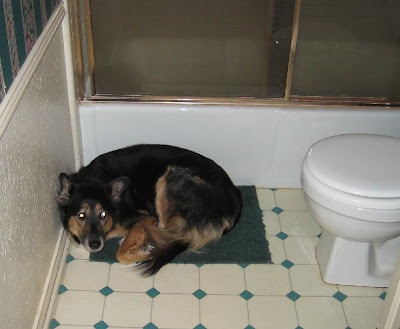 Here she is earlier this week in the guest bathroom, one of her centrally-located hidey-holes. (Her top spot is The Alpha's side of the master bathroom, but she decided at some point that this one would do, too.)

There were more storms this morning while we were out for a late breakfast. The tile guy was here, and he let the dogs in from the patio because he could tell they didn't like being so close to the rain and thunder. Apparently they were content to just hang out in the den instead of stepping in his work, so I'm glad that went smoothly.

Today the old tile in the foyer was chipped away, and the dining room is now ready for tiling, too. Sunday, a day off. (It's Sunday. Seriously. Tile Guy offered to come, but we will wait. Rest time is important.) Monday, grout will go between the laundry room tiles so we can move our washer and dryer back into place a.s.a.p. The whole project -- well, except for us moving all our kitchen-related supplies back into the kitchen -- should be wrapped up on Wednesday. Two weeks, two days, I think. Not bad.
Posted by DogBlogger at 10:07 PM 5 comments: