The icky side of rescue.

I do not regret helping rescue dogs. Not one bit.

But it does get complicated sometimes.

Dustin went to his forever home late last week. Then this week, he went for a thorough checkup at his forever veterinarian's office. And he tested positive for heartworms.

That's not all that's wrong -- the vet also confirmed our suspicion that he has some kind of hip injury, and there are a couple of other things that may need attention, too. But right now, the priority is the heartworm treatment.

After I incurred some surprise veterinary expenses caring for him, a rescue coordinator recommended that I set up a ChipIn fund for Dustin. I'm not worried about recovering any of my investment, which is why I never publicized it here. My big concern is with helping him get healthy from this point forward. So I raised the target amount on the account. I know that a number of people were rooting for him to be rescued, and I'm putting this out there on the chance that they will still want to help. 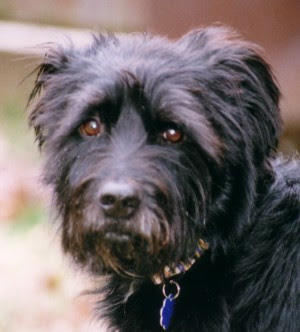 Dusty, in his new backyard
Posted by DogBlogger at 5:39 PM 1 comment:

I took a day off work today, but I'm dressed as if I hadn't.

In less than an hour, Mid-Life Rookie is picking me up and we will make the drive to the retreat center where representatives from the Board of Ordained Ministry are conducting interviews. Her round begins at 1:30 and continues until 4:30. I'm her support person: prayer, logistics, whatever she needs of me. I'm honored to be called upon for this role, and I pray that I truly am a source of support today.

We will know before we come back home this evening whether she will be recommended for ordination in June. Prayers appreciated!
Posted by DogBlogger at 9:31 AM 3 comments:

Here's Dustin on Friday night, just before we sent him off to his new home: 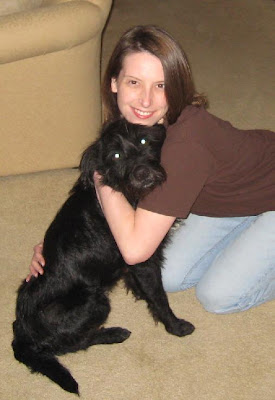 After we let him out of quarantine, his love of snuggling became quite apparent: 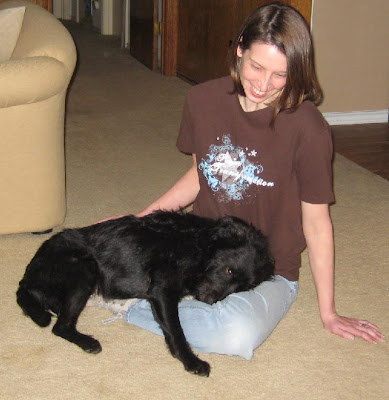 I, for one, was glad to get him out of here, because it seemed like he had imprinted on me. ("Well, you saved his life, and you nursed him back to health," says The Alpha.) Having a dog who isn't yours follow you around like you belong to him can be a little uncomfortable, especially when you are certain that yours is a two-dog household, and both positions are already filled.

So it was especially nice that when Cherrie arrived to take him to his new home, he seemed to understand that he was going with her, and there was no sign of separation anxiety. It's also good to know that I remain his Fairy Dogmother and will get to see him from time to time. He readily settled into his new digs, and was having fun with his new Jack Russell Terrier brother -- a dog who didn't have the best start in life and who seems permanently scarred by it. He won't play with my dogs, but he will play with Dustin. Their pre-adoption get-acquainted session was the first time she had seen him act like a "normal" dog. There's hope for him yet. (Maybe he just needed an Assistance Dog of his own!)

Fostering certainly isn't all smiles and tail-wagging. I'm still not sure how much longer I can take the risk of exposing our dogs to the illnesses and afflictions that foster dogs may bring with them. It helps that we commit to keeping our dogs fully vaccinated and on preventives, and that we are willing to limit contact between our dogs and fosters, but we still have to watch them for symptoms of stuff they might catch.

And when you know you've saved one life and improved another, it does feel good.
Posted by DogBlogger at 9:02 AM 3 comments:

It was bound to happen eventually. 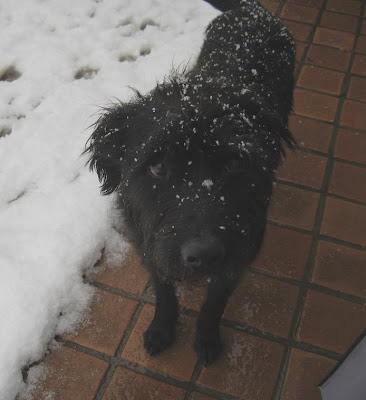 This is Dustin. As you can tell, he arrived during the Big Texas Snow of '10.

Dustin is yet another foster dog. He's not staying forever. But he's different -- he's the first foster dog who has arrived here sick.

He's currently quarantined in the empty bedroom. He's on a few medications, including antibiotics -- which, strangely, they didn't give him on the first trip to the vet. (WTF? I told you I have other dogs here and I'm worried that whatever it is could spread to them.... my fault, I guess, for assuming the prescription drug you gave him was indeed an antibiotic, but still, if you'd paid closer attention, especially when I called back to say he wasn't improving, I wouldn't have had to take him to the emergency clinic last night.)

So, for the people who pray for dogs: Please keep Dustin in your prayers.

- Yes, we had a lot of snow here. It was gorgeous. I took pictures. May post some eventually. People in Texas never get to make snow sculptures, but snow-families of five, snow dogs, snow bunnies, and snow forts started turning up in our neighbors' yards. I took some video of the dogs out in it, but they didn't go full-on Snow Poppy like a certain someone used to do when there was as little as half an inch on the ground.

- Heard about a new project involving 2/3 of my favorite trio of musicians. I pre-ordered the CD and have claimed my four free downloads.

- Had a lovely candlelight dinner at home with my sweetie tonight. We don't go in for all the Valentine hype. This morning, while we were shopping for the dinner ingredients, we walked by the greeting card aisle. "Crap, was I supposed to get you a card?" I said in the most romantic way possible. "Uh, I didn't get you one," he answered. My response: "Oh, good, we're fine, then." And that was the end of that subject. One of many reasons we make such a great couple.
Posted by DogBlogger at 8:42 PM 7 comments:

It's chilly and rainy here. I've been fighting off a nasty cold, and I had to relent and get some antibiotic assistance today.

In a little more than an hour, we say farewell to he who has become known as Little Bittle (pronounced lid'l bid'l). 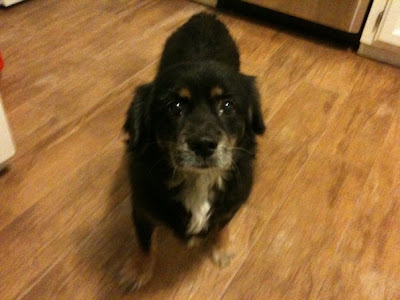 He's only a 20-pounder, which is tiny around our house. He's been at this particular stop on the Underdog Railroad since Thursday, and tonight we're taking him to the one who will transport him to points further east. He's about four years old and will make a very good companion for someone... who I hope finds him through the rescue group soon.
Saying goodbye to Little Bittle will be bittersweet, but not that bad, all around. While I'm doing it, I'll be thinking of friend and fellow RevGal Sue, who will be letting go of her beloved cat Ouzo tomorrow. They've done everything they could for that sweet kitty boy, including this last thing that will bring him peace. But this last thing is so, so difficult, even if it is the most loving and compassionate act possible. Please be in prayer for them.
Posted by DogBlogger at 5:39 PM 4 comments: